In the corporate bond market, the average spread of the Morningstar Corporate Bond Index (our proxy for the investment-grade bond market) continued its tightening trend but declined only 1 basis point to end the week at +106. In the high-yield market, the BofA Merrill Lynch High Yield Master Index tightened 5 bps to +359. In equities, the S&P 500 was unchanged and volatility sank to new lows. 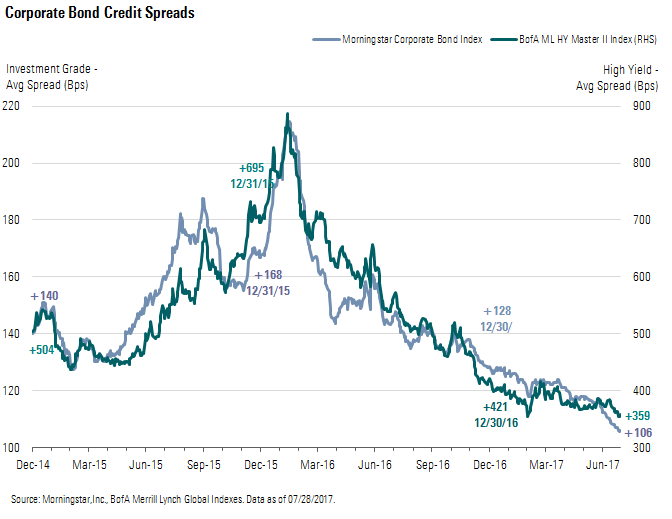 While the average spread in the investment-grade market hardly budged, the market easily digested the third-largest corporate bond deal in history. AT&T (rating: BBB/UR-) issued a $22.5 billion seven-part transaction with maturities ranging from 5.5 years to 41 years. Proceeds from the new senior notes will be used as a final installment for the permanent financing of the pending acquisition of Time Warner (rating: BBB/UR-). The order book was reportedly over $65 billion (almost 3 times the size of the transaction), which reveals the depth of demand for corporate bonds in the marketplace. After issuance, the new notes were easily digested in the secondary market as the credit spreads on the bonds traded anywhere from 2 to 6 basis points tighter than the new issue spread. We had placed our credit ratings for these two companies under review with negative implications after AT&T announced it had agreed to acquire Time Warner. We project this will increase pro forma net debt to about 2.9 times EBITDA and will probably weaken both Business Risk and Cash Flow Cushion. This marks AT&T’s second large acquisition in less than three years and further weakens its credit metrics. We view the merger as an attempt to spur growth and development of AT&T’s DirecTV investment as well as an ambitious bet on the future of wireless video delivery. Fund flows in the high-yield market came to a near standstill last week, as the amount of redemptions from high-yield exchange-traded funds more than offset inflows into open-end funds, resulting in a net outflow of $0.1 billion.

Clouds Are Forming Over the Bond Market ?