The risk/reward trade-off for 2018 will probably not have the same results as the last two years. Here’s why to stay invested, but temper your expectations.

On the heels of two good years in the bond market, the best days for fixed-income are likely behind us. In 2016, there were strong returns in most sectors, especially high yield corporate bonds, which generated double-digit gains. It was more of the same in 2017: the year was driven by strong global demand and scarce inflation. Returns will likely struggle to match a similar pace in 2018, based on a lower starting point for yields and expectations for low inflation and rising interest rates. And there’s no extra risk premium to compensate investors for any negative surprises. The temptation is to extrapolate recent returns and suggest another good year for bonds, but our analysis suggests something less.

A lower starting point in bond yields reduces the total return opportunity in fixed-income. Government bond yields and risk premiums for non-government bonds are historically low. When we look at the whole picture, yields for most sectors of the bond market offer little protection from rising rates, higher defaults or exogenous shocks. To put it simply: low starting yields mean less cushion for being wrong and less upside for being right. 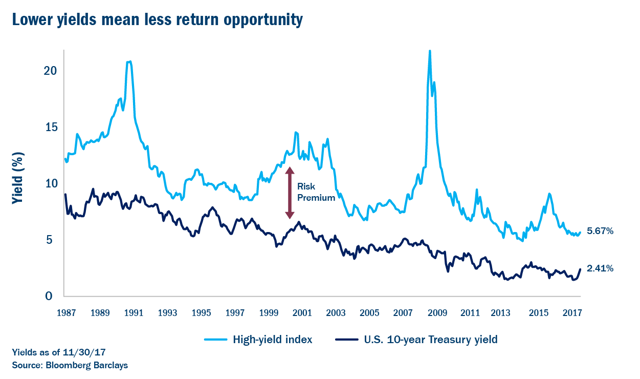 Are we too complacent?

Another reason to exercise caution is that investor expectations may have swung too far. Many people went from being overly fearful of the Fed and inflation when bond yields were higher to overly optimistic about the Fed and inflation at lower yields. In fact, bond managers have been wrongly calling for higher rates since the great financial crisis, pointing to ultra-low yields globally and massive stimulus by the major central banks. Yields could only go up, right? Wrong! Yields stayed lower for far longer than most expected, and the Federal Reserve was as misguided as anyone in their forecasts for short-term interest rates. But as global financial conditions have improved and central banks have become less accommodating, investors have shown little concern that the environment might be changing. They aren’t fearful of an acceleration in rate hikes or inflation. Simple but sage advice when investing: Be greedy when others are fearful, and fearful when others are greedy. 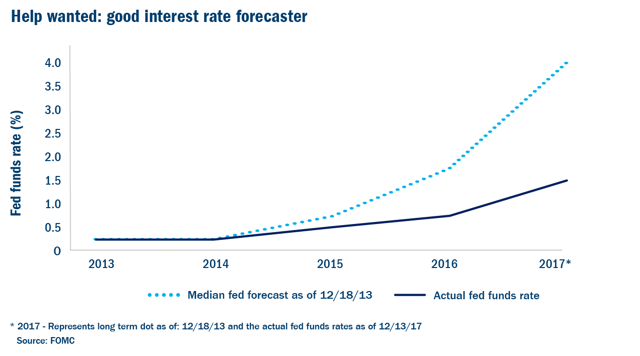 What’s more is too much money may be chasing bonds at historically low yields. Strong global demand has caused some investors to reach for yield in low-quality corporate bonds, frontier markets and other less traditional investments. Many of these investors have not experienced rising interest rates or credit downturn (2015 doesn’t count – the sell-off in corporate bonds was very concentrated in commodity-sensitive industries). Some call this imbalance a bubble, which may be overly dramatic, but the point is crowded trades can exaggerate price moves as investors enter and exit positions en masse.

Inflation is the missing puzzle piece

In recent years, the cumulative effect of massive stimulus by central banks helped restore and improve financial conditions, create jobs and generate strong market returns. But surprisingly, core inflation has been a no-show. One dramatic example of missing inflation is modest U.S. wage gains during a period of significant decline in the unemployment rate. Inflation is so overdue that many people are now questioning if this is a structural change rather than a temporary one. For the first time, outgoing Fed Chair Janet Yellen commented before her departure that perhaps low inflation was not transitory at all. If this is true – and more and more are subscribing to the possibility – low yields may be justified. If it’s not true, the market may be wondering if it’s different this time, when in fact it’s not. The jury is still out. 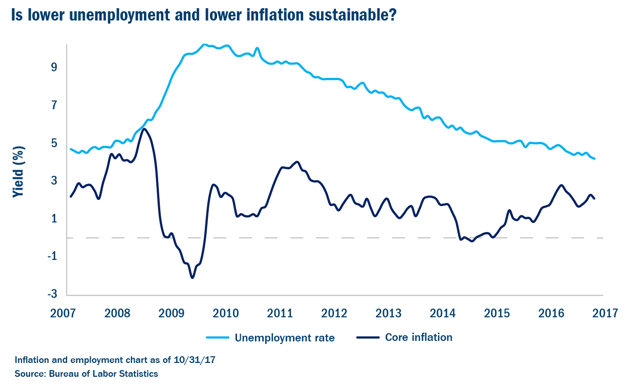 This year will most likely produce different results for fixed-income investors than the prior two years because the risk/reward trade-off will probably be less compelling for high- and low-quality bonds. Even a modest rise in interest rates (like half a percent) would generate price losses for U.S. Treasuries, which would more than wipe out income return given that coupons are so low to begin with.

At the other end of the risk spectrum, high yield corporate bonds kicked off 2018 with average yields around 5.5%, or about 3.5% more than U.S. Treasuries. The yield premium compensates investors for about a 1% default rate. Our internal research analysts forecast defaults between 3% and 4%. In other words, investors are not being adequately compensated for expected default risk, whereas we prefer that they’re compensated for expected defaults plus extra risk premium for potential negative surprises. When investors are not compensated for taking risk, they should not take those risks.

Back-to-back years of strong returns in fixed-income are a tall order, especially at current valuations. The upshot for 2018 may seem unexciting, but prudent bond strategies are still likely to outperform cash. Our fixed-income playbook calls for less interest rate and credit risk and more diversification. Stay invested, but temper your expectations, turn down risk and wait for better days and higher yields.

The Bloomberg Barclays U.S. Corporate High Yield Bond Index measures the USD-denominated, high-yield, fixed-rate corporate bond market. Securities are classified as high yield if the middle rating of Moody’s, Fitch and S&P is Ba1/BB+/BB+ or below.

It is not possible to invest directly in an index.