A rapid rise in short-term yields in U.S. government debt is restoring their appeal. This marks a major shift away from the post-crisis era of near-zero yields on such instruments. The upshot: Investors now have a viable alternative to cash with yields finally above inflation levels. 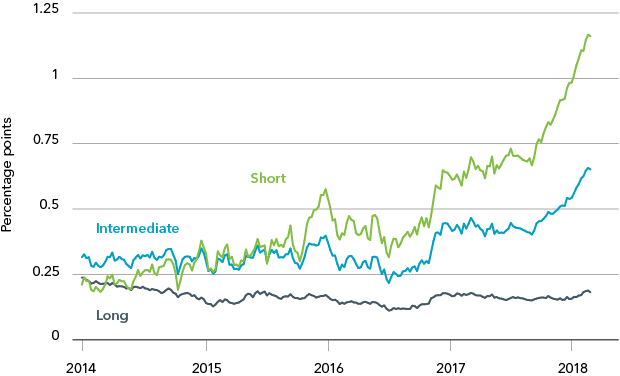 Sources: BlackRock Investment Institute, with data from Thomson Reuters, March 2018.
Notes: The yield cushion is defined as the percentage point rise in yield that would cause a price decline large enough to wipe out one year’s worth of income. Short, intermediate and long maturity Treasuries are represented by the Bloomberg Barclays 1-3 year, Intermediate and Long U.S. Treasury Indexes.

The steady increase in shorter-maturity bond yields provides a thicker cushion against concerns around further rises in interest rates. The light green line in the chart above shows interest rates would need to jump more than one percentage point to wipe out a year of income in the two-year Treasury note. This is nearly double the cushion on offer two years ago – and far larger than the thin insulation provided by longer-term bonds today. We believe the short end offers relatively compelling income along with a healthy buffer against the prospects of further increases in yields.

The fruits of normalization

The rise in short-term U.S. rates reflects multiple market crosscurrents. The U.S. Treasury market is catching up with the Fed’s own projection of rate hikes in 2018. This reassessment is largely driven by stronger growth expectations tied to fiscal stimulus. Fed Chair Jerome Powell’s upbeat appraisal of the economy has reinforced expectations for three to four rate hikes this year.

But two important aspects are influencing rates at the short end of the curve. First, the tax overhaul and budget agreement are spurring a sharp uptick in U.S. Treasury issuance, particularly in one-month to one-year bills. We estimate net bill issuance to hit $500 billion this year, far beyond that seen in recent years. This comes as the Fed is winding down its bond holdings.

Second, U.S. companies repatriating cash following the passage of the Tax Cuts and Jobs Act are causing some ripples in the front end. Money market funds, one of the largest buyers of front-end credit, may be building liquidity in anticipation of any repatriation-related redemptions. Meanwhile, actual and anticipated selling of short-duration bonds as companies repurpose repatriated cash has led to a widening in spreads.

We believe both these factors are technical and the back-up in yields opens up opportunities. Short-dated Treasury debt now provides an attractive real return as yields now stand firmly above realized and target levels of inflation. And as the market has adjusted to an outlook of three to four Fed rate hikes, we see limited downside from price erosion as we see pricing in more than four hikes as very unlikely.

Traditionally “safe” and liquid assets can now better compete for investor capital. Broadly, we still prefer equities over credit due to strong earnings growth, modestly cheaper valuations following last month’s swoon and market’s pricing in expectations of Fed rate increases. And repatriation of corporate cash may lead to more share buybacks. Our preference leans firmly toward pro-cyclical stocks. Within fixed income, we see higher yields as an opportunity for investors to add short-end exposure that avoids duration risks further out the curve.

Views from a U.S. dollar perspective over a three-month horizon

Bond Giants Lay Out Their Top Trades for 2018