Fixed-income performance in the fourth quarter was mixed, as the shape of the yield curve compressed to its flattest level since before the 2008-09 global financial crisis and corporate credit spreads diverged between the investment-grade and high-yield sectors. Similarly, year-to-date performance was significantly affected by the flattening curve, as the performance of short-duration indexes was muted, whereas long-duration indexes outperformed. While there were a few spikes in volatility earlier in the year, volatility was subdued in the fourth quarter and ended the year near historical lows.

In the corporate bond market, credit spreads in the investment-grade market have tightened this past quarter, whereas credit spreads in the high-yield market have widened slightly. While there was a slight divergence this quarter, year-to-date corporate credit spreads have tightened across both the investment-grade and high-yield sectors. Corporate credit markets have been buoyed by a combination of generally improving credit metrics, fewer debt-funded mergers and acquisitions or shareholder-enhancement programs, and the market’s expectation that revisions to tax and regulatory policies will bolster corporate credit strength by invigorating economic growth and boosting earnings.

The Morningstar Core Bond Index, our broadest measure of the fixed-income universe, eked out a gain of 0.40% in the fourth quarter, as declining long-term interest rates provided enough price appreciation to offset the pressure from rising short-term rates.

Underlying the Core Bond Index, the Short-Term Core Bond Index registered a loss of 0.24% as short-term rates rose to their highest levels in over a decade. The Intermediate-Term Core Bond Index was nearly unchanged, registering a loss of 0.04% as rising rates more than offset the yield carry from the underlying bonds in the index. The outperformer this past quarter was the Long-Term Core Bond Index, which rose 1.93%. In the Treasury market, the Morningstar US Government Bond Index registered a gain of 0.10%, as the negative impact of rising short-term and intermediate-term rates on bond prices offset much of the yield carry for the quarter. Similarly, the Agency Bond Index eked out a 0.02% return. After lagging much of the rest of the fixed-income universe in the first half of the year, Treasury Inflation-Protected Securities performed well in the fourth quarter. The Morningstar TIPS Index rose 1.31% as inflation expectations held steady.

In the corporate bond market, the Morningstar Corporate Bond Index (our proxy for the investment-grade bond market) rose 1.10%, supported by a modest tightening in corporate credit spreads and a slightly longer duration than other indexes. In the high-yield market, the BofA Merrill Lynch High Yield Master Index rose 0.39%, as the higher yield carry of the index was offset by a slight widening of corporate credit spreads in the junk bond market and the increase in medium-term interest rates. In Europe, tightening credit spreads and lower interest rates helped bolster the Morningstar Eurobond Corporate Bond Index, which rose 0.49%. 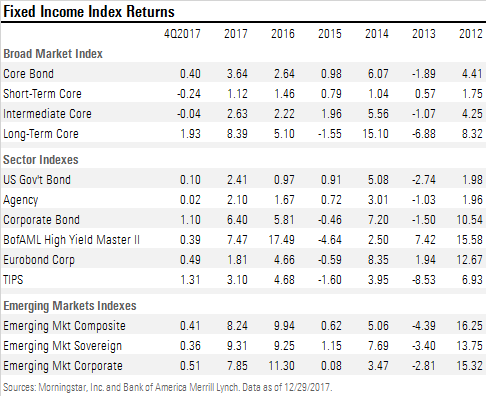 Weekly Corporate Bond Market Highlights
The corporate bond market began to wake up after the typical seasonal holiday-indexed slowdown. The window to the new issue market reopened, and secondary market trading emerged from hibernation. However, reinvigorated activity did not result in a revival in volatility, which remained muted, and corporate credit spreads tightened. In fact, volatility in the equity markets reached all-time lows during intraday trading. For example, the CBOE Volatility Index declined to below 9 for the first time. Over time, market volatility and corporate credit spreads have been highly correlated. Based on the average spread of the Morningstar Corporate Bond Index since 1990, the VIX and investment-grade credit spreads have an R-squared of approximately 85%.

The average spread of the Morningstar Corporate Bond Index (our proxy for the investment-grade bond market) tightened 1 basis point over the course of last week, ending at +95. The BofA Merrill Lynch High Yield Master Index tightened 22 basis points to end the week at +336. 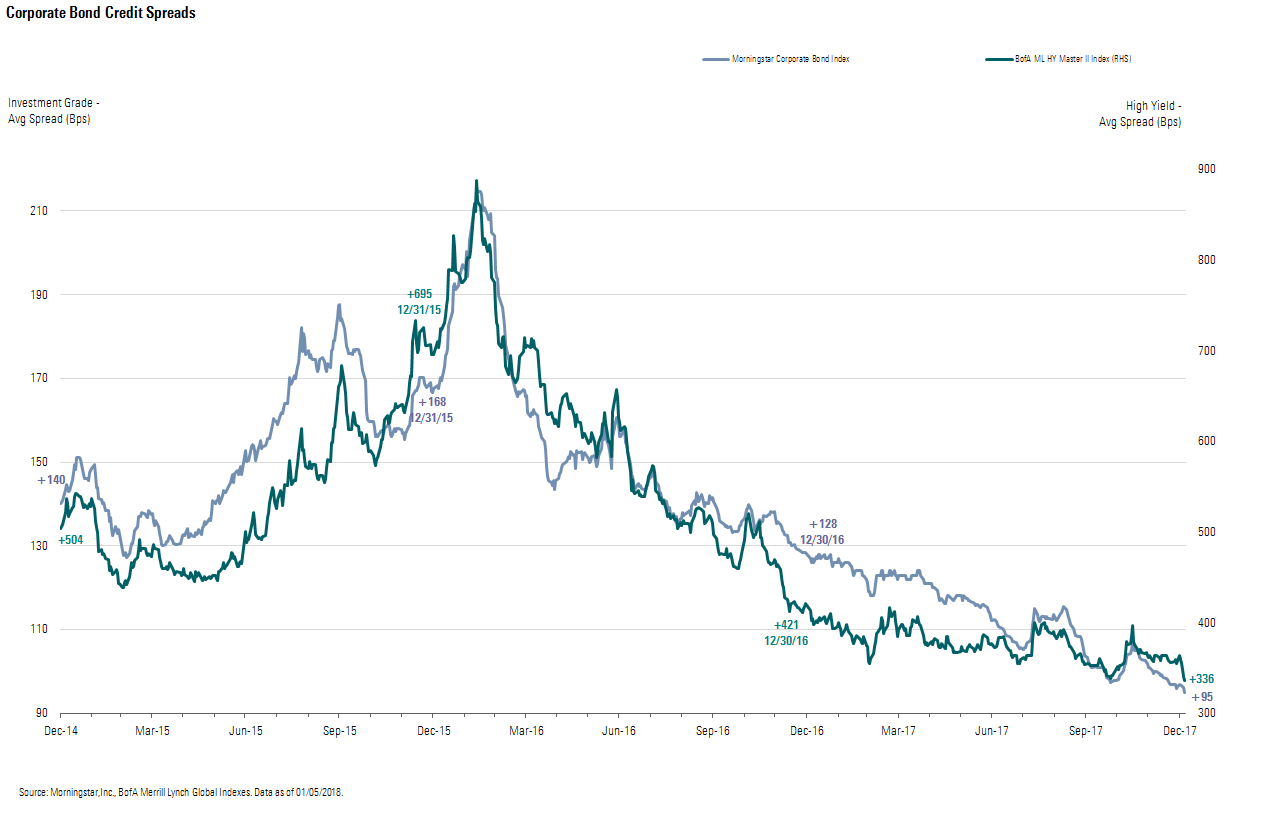 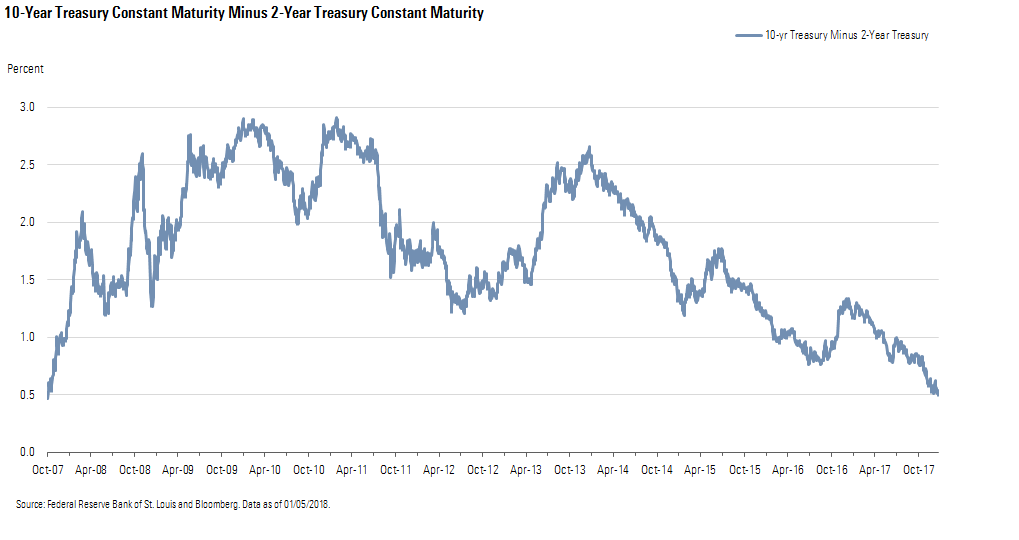 What To Expect In The Fixed Income Markets This Year