Fixed-income investors are playing defense. Surveys show they have a record weighting in short-term debt, whose prices are less sensitive to changes in interest rates than longer-maturity bonds. Fund managers are steering more of their portfolios into higher quality and liquid securities. The concern is that stronger global economic growth may spark faster inflation, prompting central banks to tighten monetary policies faster than anticipated. 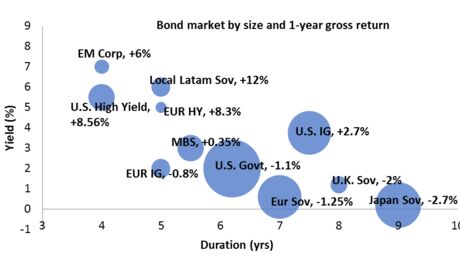 Almost no discussion of bonds these days is complete without speculation on which part of the market will be revealed as being in a bubble when the era of easier monetary policies finally passes. I suggest there are potentially two trouble spots: U.S. investment-grade corporate bonds and European government bonds.

Demand for investment-grade fixed income continues unabated despite signs of rising leverage. There are also signs that the performance of the market is being driven by a handful of issuers, possibly the result of the growing influence of exchange-traded funds as well as index funds owning a growing share of individual corporate bonds. Index funds need to quickly invest all the money that is flowing into their coffers to avoid deviating too much from their benchmarks. The fastest and most efficient way to get that money to work is to buy the biggest, most liquid bonds, which is why the top 10 issuers in major credit indexes are in demand. On the flip side, borrowers have taken advantage of this demand by issuing large amounts of bonds.

The European Central Bank has built a 1.8 trillion-euro ($2.14 trillion) portfolio of government bonds with an aggregate duration that is a year longer than the indexes tracking the market (see Fig 2). Unlike other sovereign debt markets, investors in Europe can’t “short” cash government bonds or hedge their positions with credit-default swaps if they don’t hold the underlying bonds. The Eurex futures exchange imposes position limits by investor class and each European government bond is subjected to so-called collective action clauses, which are a mechanism designed to foster “orderly” restructurings because it requires a supermajority of investors to approve any changes to the structure of a bond. The region’s debt crisis of a few years ago also led to several programs such as the European Stability Mechanism that would allow authorities to intervene in the primary market for government bonds in times of turmoil.

When combined with the ECB’s purchases, these forces have artificially inflated the valuation of European government bonds. Now that the European economy is showing signs of consistent strength and the ECB is likely to reduce its quantitative easing measures, valuations could be at a higher risk of reversing considering the gap in durations described above.

Detecting financial bubbles has been the subject of academic debate for years. There are various schools of thought, such as “extrapolative expectations,” which says bubbles may linger for long periods because people come to expect rising asset prices. But in today’s world, bubbles should be judged not by size, duration or return but rather by the forces that keep them afloat. Once those forces change, only then will the true size of the bond bubble be revealed.

Why a surge in bond yields could be around the corner

Clouds Are Forming Over the Bond Market ?