There are several red flags to watch, but it’s not all bad news for bond investors.

We’ve heard rumblings several times in the last decade that interest rates were on the cusp of rising from their near-zero recessionary levels, but it’s actually starting to happen now, and the potential ripple effects from rising rates will reach across the financial markets.

In my last column, I talked about two red flags for fixed income investors. Here are three more signs that a seismic shift in the bond markets is coming: 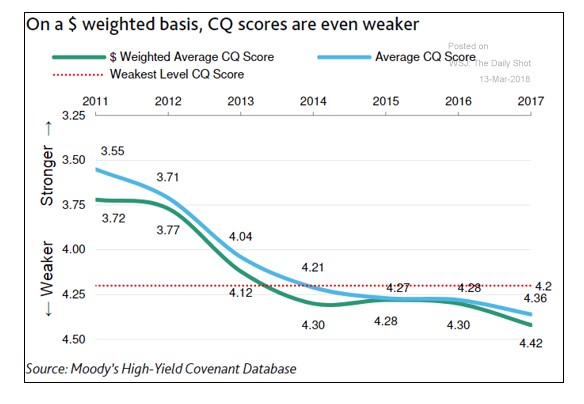 A direct byproduct of low rates has been the flood of yield-chasing money into the junk bond market, making it easier than ever before for speculative companies to borrow. Not only has new debt been cheap to issue, but bondholders haven’t demanded the same level of protection they did historically, making the credit market more vulnerable in an economic downturn.

Creditor protections, as measured by the Moody’s Covenant Quality Score, have deteriorated in five of the last six years and stand near the worst levels on record. In 2017, bonds with the weakest level of protections represented 65% of the issues Moody’s tracks, up from 23% in 2011. In January, a Moody’s vice president commented, “Borrowers are making the most of a wide-open loan market.  As demand continues to outpace supply and pressure on covenant quality remains intense, it is hard to see what investors get in return for giving up covenants in these frothy market conditions.” 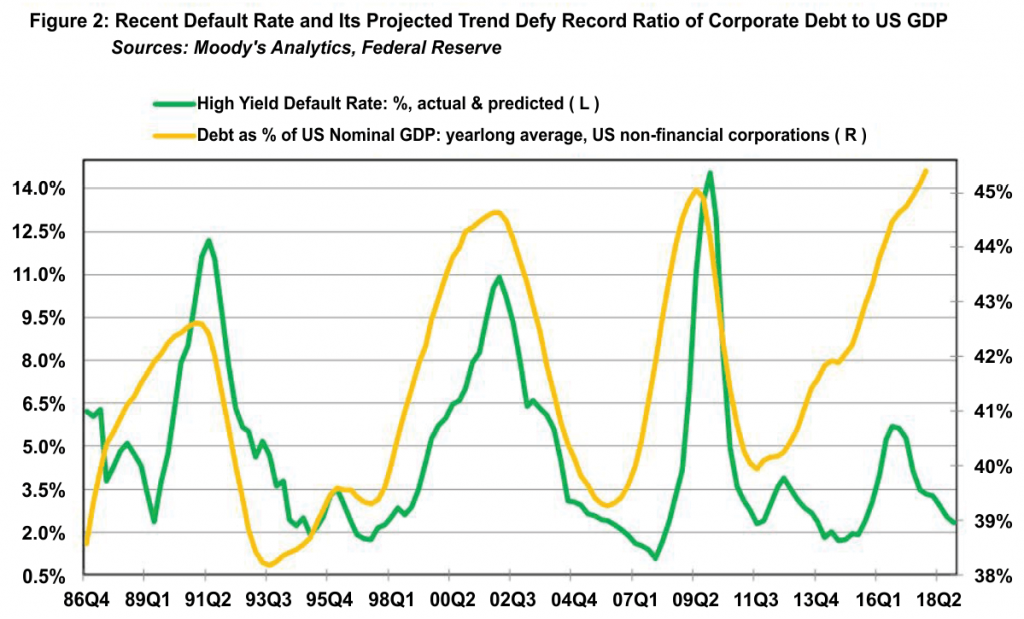 In the last 3-4 years, high yield default rates have uncoupled from their historical relationship with overall debt levels. As 13D Research put it, “For roughly three decades, U.S. nonfinancial corporate debt as a percentage of U.S. nominal GDP and the high-yield default rate moved in tandem. It was a logical relationship — more debt meant more defaults. However, the lowest interest rates in human history broke that correlation, and today, the divergence remains near its post-crisis extreme.”

As the Fed begins to raise rates and unwind its bloated balance sheet, one would think investors would be cautious. But the combination of placid credit conditions and better yields than the paltry 2-3% paid by many investment-grade bonds has created a false sense of security for enthusiastic buyers, which leads to our final red flag.

In the decade-long reach for yield, money has flown into longer-duration and lower-quality debt with little regard for the underlying risks. The aforementioned historically high leverage, exposure to floating rates and weak covenant quality notwithstanding, corporate bond yields have been tightening to near record lows over risk-free Treasuries as competing buyers demand less and less compensation for taking credit risk. Bonds in the ICE BofAML high-yield index are yielding an average of just 3.7% more than comparable Treasuries, up from a post-crisis low of 3.2% at the end of January. 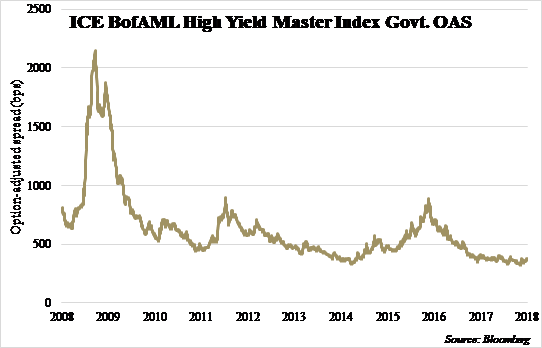 Bond funds, especially passive ones, have driven much of the demand for new debt over the last decade. Federal Reserve data shows that mutual funds and ETFs have gone from owning just over 6% of the corporate bond market at the end of 2008 to almost 20% at the end of 2017. Over the same period, passive products have more than doubled as a share of total taxable bond fund assets, according to Morningstar data. 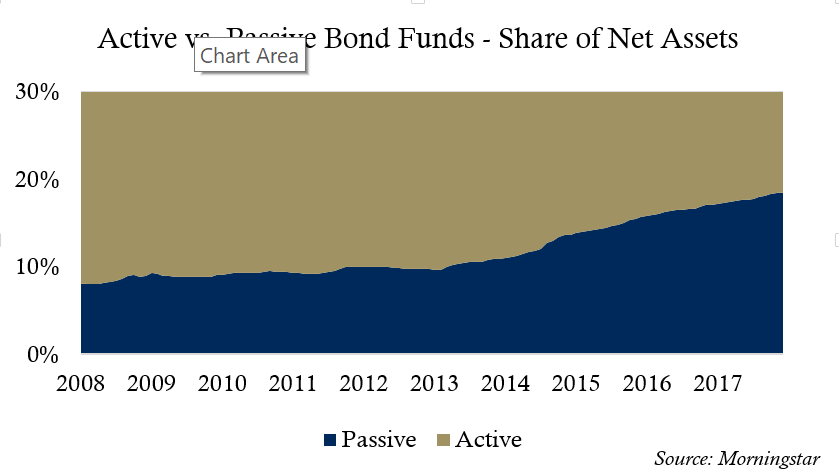 There are two problems with passive and marginally active funds driving an increasing share of bond buying. Like equity index funds, the underlying buyers are inherently price-insensitive.  But unlike equity index funds, which are weighted by market cap and are thus skewed toward larger and ostensibly higher quality companies, bond indexes are weighted by the amount of debt issued. As a bond indexer, you’re lending the most money to the companies that issue the most debt, leaving the index skewed toward issuers with the most leverage.

In aggregate, we think investors in high-yield bonds today are being poorly compensated for risks in the next several years. We agree with the Bloomberg columnist Nir Kaissar, who said, “For that to change, high-yield bond markets will have to become a lot scarier than they have been in recent weeks.”

It’s not all dark clouds on the horizon, though — savers in money markets and CDs will benefit from rising rates, as will patient buyers of high-quality bonds. While bond prices and interest rates are inversely related in the short run, starting yield is also the single best predictor of future long-term bond returns. The same Bloomberg piece showed a high correlation between starting yields and subsequent 5- and 10-year returns for both high-yield and emerging market bonds. This makes intuitive sense — assuming no defaults, a 10-year bond purchased at a 2% yield to maturity will, by definition, average 2% nominal returns over the next decade despite any intervening price fluctuations, while the same bond purchased after a rise in rates at a 6% starting yield and held to maturity will average 6% nominal returns. As rates return to more “normal” levels (a nebulous concept, but materially higher than 0%) and the underlying risks in the bond market are exposed, I think we’ll begin to see a return to more rational risk/return dynamics, as well as significant mispricing opportunities.

The best advice I can give my fellow fixed income investors is to know what you own. Whether it’s individual issues or a bond ETF, take the time to understand the underlying credit and interest rate risks. Avoid long-duration assets if your portfolios can’t tolerate significant volatility. Stay clear of highly levered companies that will be most heavily impacted by the end of cheap debt.  When the fault lines shift and the ground starts to shake, make sure your investments are already firmly anchored.

Rate hike? Protect your 401(k) from rising interest rates with this plan

How to replace income with a bond ladder